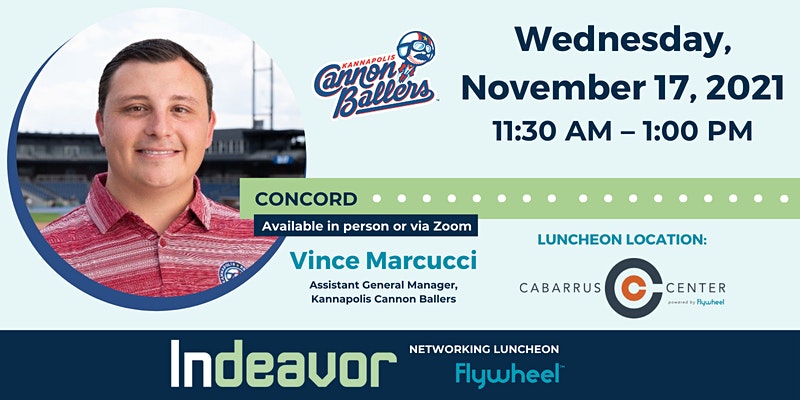 Sit down to lunch with Vince Marcucci, Assistant General Manager of the Kannapolis Cannon Ballers!

After a thriving textile mill was shut down, Kannapolis (traditionally a vibrant mill town), went into deep desolation and economic despair. Home of NASCAR legend Dale Earnhardt Sr., Kannapolis struggled to recover into the strong community it once was. Storefronts emptied, a once bustling Main Street became a ghost town, and the city’s reputation dwindled. Citizens were split between those that supported a change and those that proudly felt the city was fine as it was. With new ownership of the baseball team and a massive downtown revitalization project in the works, Kannapolis was on the brink of major growing pains and Vince Marcucci was at the heart of it.

>> REGISTER FOR THIS EVENT

Vince Marcucci is the Assistant General Manager for the Kannapolis Cannon Ballers. Formerly the Kannapolis Intimidators, Vince joined the team right before they decided to rebrand and restrategize. What began with a turbulent response from the community (“Intimidators” came from hometown hero Dale Earnhardt Sr.), Vince led into a successful reinvention. Even through major staffing changes and lack of a General Manager, Vince led the Kannapolis team with vision. He garnered thriving local support for a baseball-headed mascot named “Boomer” and even rallied a fan base through a pandemic that shut the team out of their opening season, and led to sold-out games when they finally debuted in 2021. This was all in tandem with a master plan to completely revitalize and reinvent Downtown Kannapolis, merging tradition and history with a resurgence of development and innovation.